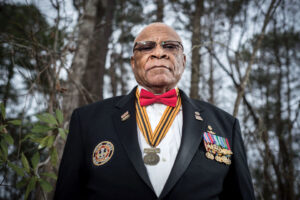 Retired Maj. James Capers was awarded the Silver Star Medal, the nations’s third highest award for valor, during a ceremony at the MacDill Air Force Base officers club Oct.27. Capers was one of five Marines from 3rd Force Reconnaissance Company who received awards for valor in combat operations conducted more than 43 years ago.

James Capers Jr. is a true American hero and Force Recon Marine legend who participated in over 50 classified missions, was wounded 19 times in battle and is one of the most decorated African American servicemen to ever serve.

He was born on August 25, 1937, in Bishop, South Carolina to a family of sharecroppers during the Jim Crowe era. Capers’ father had served time on a chain gang for a crime he did not commit and eventually fled to Baltimore with his family. The city was the backdrop for two life-changing moments, meeting the love of his life and future wife Dottie and enlisting in the Marines out of high school. This would be the start of a legendary career that broke barriers as one of the greatest U.S. Marines in history.

During his service, he would be selected to join the elite Force Recon Marine unit where he excelled, breaking training records, participating in 64 long-range reconnaissance patrols and five major campaigns in Vietnam. He was a natural leader and father figure to Team Broadminded, a specialized group of Force Recon Marines. Capers and Team Broadminded were routinely selected to go on the most dangerous and clandestine missions in Vietnam.

Missions included a POW rescue ordered by President Johnson, amphibious assaults in the DMZ, recovery of a B-57 rumored to have a nuclear bomb, and search and destroy patrols in Phu Loc.

In the fall of 1967, still recovering from combat injuries, Major James Capers was selected to represent the U.S. Marines in a national recruiting campaign. With full integration completed only in 1960, Capers’ image became the Marine Corps most popular recruitment campaign.

Following Vietnam, Capers participated in many Cold War covert operations as a field agent in Eastern Europe and Africa. Details of these operations remain classified today.

His wife Dottie and son Gary passed away in 2003 and were buried in Arlington National Cemetery. Capers celebrated his 50th anniversary with 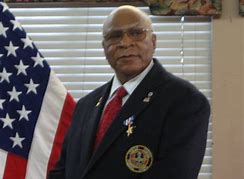 Dottie one week before her passing.

In 2010, Major James Capers Jr. was one of only 14 members inducted into the inaugural class of U.S. Special Operations Command’s Commando Hall of Honor at a ceremony in front of USSOCOM headquarters at MacDill Air Force Base. Major Capers Jr. is recognized as a pioneer in Recon training tactics which are still used by Special Operations forces around the world.

He and the surviving members of Team Broadminded meet annually to celebrate and honor those who have passed. Capers currently resides in North Carolina and continues to be part of the special operations community.